Title: 1 step forward and 2 steps back--48 Caddy project
Post by: 48caddymn on May 03, 2016, 08:52:40 PM
I thought I was finally on the final stretch to get my 48 Cadillac back on the road after sitting for 10 years, but fate threw another curve ball at me.  I spent the last 10 months trying to bring the Caddy back to life. I finally got it on the road last week and put 30 miles on it after finding a replacement flathead engine, replacing a majority of the wiring, all new brake system, fuel system, re-core the radiator and many many other projects to get where I am today. The flathead ran beautiful and everything was looking great.  Tonight I drove the car 10 miles and when I was backing it into my garage I noticed tranny fluid running out of the front of the hydramatic transmission.

Before I put the engine and transmission back in the car this winter, I pulled the tranny partially apart and everything looked perfect.  I installed all new seals including a new front pump seal.

Anyways, I needed to vent since pulling the motor and tranny again is a major job and I'm not looking forward to it again.  Besides the front seal, it there any other seal or o-ring that might have blown out.....the tranny fluid  just runs out in a steady stream from the front pump area with the car running.

Title: Re: 1 step forward and 2 steps back--48 Caddy project
Post by: Bobby B on May 03, 2016, 10:01:52 PM
Dan,
Hi....Did you seal up the Torus cover gasket well, including the use of Pliobond 20 before assembling it to the flywheel with the 30+ Bolts/Nuts, torquing in sequence? If you changed the front pump seal, how did the metal oil seal "rings" look, and was the Torus cover rear hub scored at all causing the rings not to seal? Did you check the Torus cover for "runout"? There's very little tolerance acceptable there. Don't get discouraged, you"ll find the problem. I'm in NJ, and if you are within reasonable driving distance, I would be more than happy to help you out.
Bobby
Title: Re: 1 step forward and 2 steps back--48 Caddy project
Post by: 48caddymn on May 03, 2016, 10:40:06 PM
Thanks Bobby.....I'm in Minnesota so it would be a heck of a road trip for you.  I pulled the inspection cover off of the transmission and the torus gasket is nice and dry.  I did use the pliobond on the gasket and torqed each to 35 pounds; I'm fairly certain that is not where the leak is coming from.  No, I did not check the torus cover for run out since I did not have a dial gauge?  I believe there were two oil seal rings and they both looked good and I did not notice any scoring.  I don't have access to a hoist so instead of pulling all of the sheet metal off the front like I did to get the motor and tranny installed together, I'll see if I can get the car 2 feet up on cement blocks so I can drop the tranny out the bottom with a tranny jack.
I'm impressed on how the engine runs so smooth and quiet, but I need a transmission to make it go...

Thanks again for the help; I will keep you posted when I get a chance to pull the transmission .

Dan
Title: Re: 1 step forward and 2 steps back--48 Caddy project
Post by: Bobby B on May 03, 2016, 11:35:45 PM
Dan
That's tough with the "X" Frame. Before you pull it, can you see where it's coming from, and does it do it only in certain gears?  Leaking stationary @ idle or in any specific gear/speed? Could be a faulty pressure regulator valve ( kicks @ 80 lbs.) or maybe the by-pass valve ( kicks @ 70 lbs.). Is the valve body clean and moving freely? I would do a little detective work first, while it was still in the car before I went that route again. Could be something simple.
Bobby 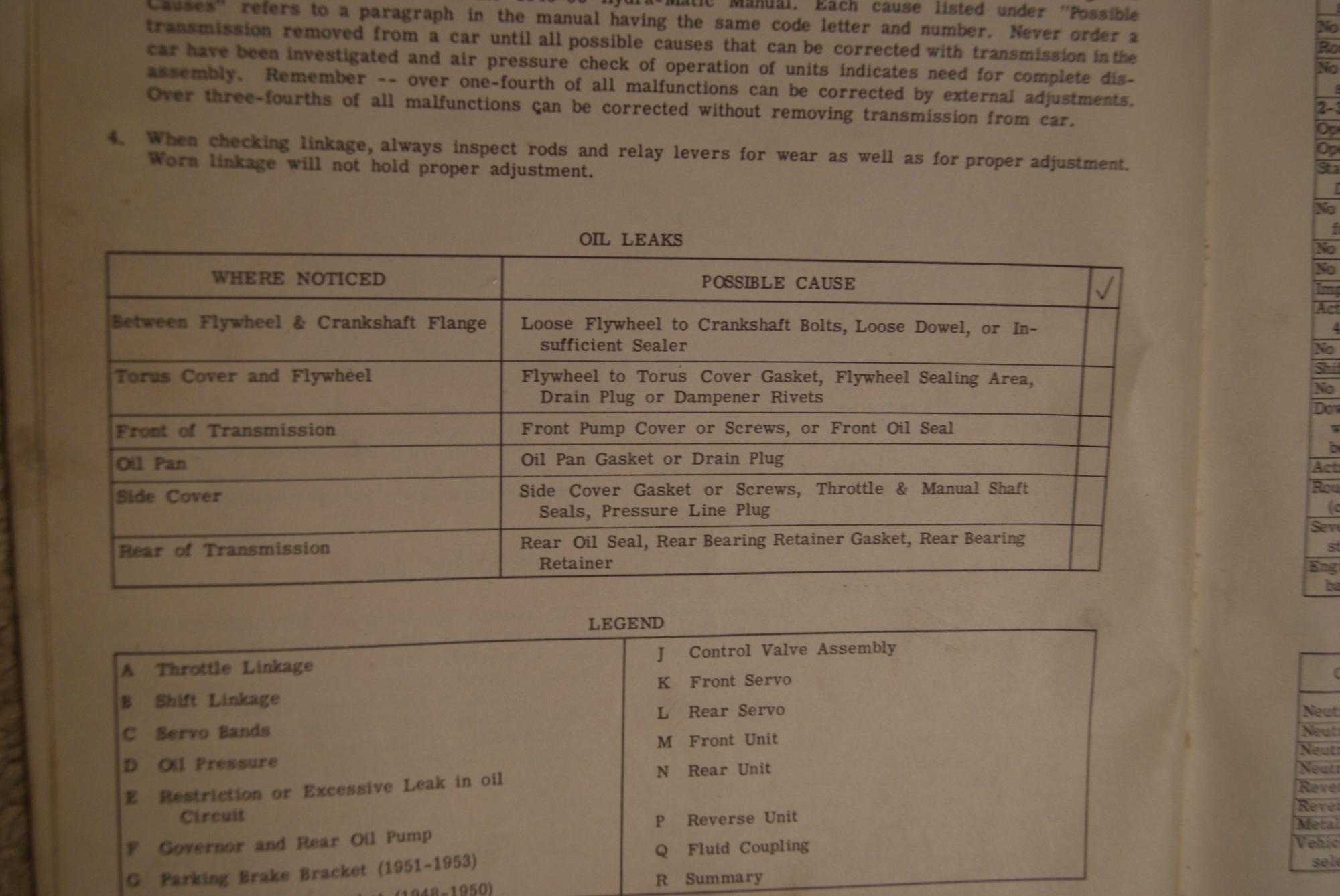 Title: Re: 1 step forward and 2 steps back--48 Caddy project
Post by: fishnjim on May 04, 2016, 10:09:44 AM
Might be one of those things better let the trans shop do.   Cement blocks sounds like trouble for you.   No sense getting hurt.
In old days, they'd throw saw dust/leak stop in it til it stopped leaking and sell it ASAP.
I certainly feel your pain.  Letting it sit is one of the no no's.   The trans guy said mine was OK and not to pull apart for fear of leaks but it was faulty inside and need a total rebuild.   Go by miles.  If it's over 50K miles it's gonna need some work.   Years, for seals, soft parts, etc.  Failures follow what is known as a Weibel distribution or "bathtub" curve.   They happen mostly either when new or at end of life.
Project car = the more I do, the behinder I get.   Fix one thing, another goes wrong.   Fix that, then the other goes again...
Collector car hobby= a costly habit you throw money into so you can feel better having a unique ride.
My saga started a year ago, still not on the road.   I drove it to make an appt with body shop and it boiled over coming home.   I'm about $X000s into it now and it's still on jack stands.  Not much mechanical that hasn't been addressed.
Life's little pleasures, but it'll all be worth it one day.   They say it's about the journey, but sure would be nice for a short cut now and then.
Title: Re: 1 step forward and 2 steps back--48 Caddy project
Post by: 48caddymn on May 04, 2016, 04:56:25 PM
Well said; a bad day in the garage working on a Caddy is still a good day overall.  I'll evaluate the car this weekend and check a few other things that Bobby recommended and see what approach I end up going with.  I knew just installing a seal and gasket kit in a 68 year old transmission was a risk, but I guess I got to drive it 50 miles before something went bad.  It certainly is a balancing act on how much to spend on a car compared to what it is worth, especially if there is no sentimental attachment to the car such as this one.

I've pulled multiple transmissions and engines on the other cars I restored, but this ship anchor of a flathead and tranny certainly make it challenging.  I'm always safe on what I do; so if I do jack up the car I will make sure it is very stable

Bobby..........so your saying with the X frame the tranny can not come out from below since the tail shaft sits too far into the frame to lower out with the engine in place?  The good news is my brother is a transmission mechanic at a local GM garage, but I'm not sure he ever tore into anything like an ole Hydramatic.

so your saying with the X frame the tranny can not come out from below since the tail shaft sits too far into the frame to lower out with the engine in place?

No, it's just a little more difficult because you have to slide that weight back before lowering it down to clear the flywheel/engine.