Title: Love of '41 Cadillacs
Post by: TonyZappone #2624 on August 15, 2020, 07:26:04 AM
I read Jeff Shively's article in the Self Starter about driving the '41 Cadillac.  I probably never owned a car that I enjoyed driving more than my '41 60S.  It was a pretty much original car that had been broomed up, (fenders painted, probably bumpers plated, etc.).  It made all the right noises, shifted nice, and just felt like what I thought a Cadillac should feel like.  I grew up in a little quarry town on the Erie Canal in Western New York in the late forties.  A widow of one of the Moore families, who had owned a quarry, had a '41 series 61 four door.  She would wind that pretty blue car through the gears, going by our house and I never forgot the sound and the sight of that pretty blue car.  My dad was her chauffeur, until he taught her how to drive, which kinda eliminated that job.  She drove that car until 1958 when she traded it for a black Coupe deVille.
Title: Re: Love of '41 Cadillacs
Post by: Barry M Wheeler #2189 on August 16, 2020, 04:44:41 PM
Tony, on my way home with my first '41, I too was entranced with the seemingly endless climb through second gear. The winter of 1958 in Indy was quite cold and I never had the car fail to start. (I did lose an idler gear in the parking lot after dropping Gay off from a date while she was in nurses' training.)

Jeff's (mine) 60S was repainted black from Cavern Green. When I took the front door fender extensions off, I found that the cowl area behind them had been painted as well. The car came from Arkansas so I guess they take them apart when they paint cars down there. Luckily, I've been able to put that car out of sight/out of mind these days as I sure miss it.

Title: Re: Love of '41 Cadillacs
Post by: Chris Cummings on August 17, 2020, 09:32:24 PM
From sophomore year of High School through college I lived '41 Cadillacs. I bought a pretty nice unrestored 75 sedan off a used car lot for $620 and rode in regal splendor.  Then my father persuaded me to buy a 61 coupe from a want ad in the paper for $475.  It was great to have a back-up if I had to get a fuel pump or generator rebuilt.  Those cars taught me a lot about the pre-war era, how cars work, and how to keep them running.  There's nothing like the gentle kick in the seat of an early Hydramatic upshifting (the 61 coupe). And you could live out of the back seat of the 75.  The coupe now lives in Sweden and the 75 sedan in sunny Spain.

Memories!
Title: Re: Love of '41 Cadillacs
Post by: denniscaddy on August 18, 2020, 12:44:00 PM
Like many of you, I've liked '41's for a long, long time.  My first car was a '41 Pontiac, and even then I wanted to move up to the top.  I bought a '41 60S from John Gately (was Fred Stone's) in the '80's, but though I liked it, it needed everything and I sold it.  About 5 years ago, I heard on this forum that Bud Worthman's 60S was for sale;  I ended up buying it, and what a car it is.  It is a CCCA Senior Premier car, and won the first Ansell Sackett award given by the CLC.  It has just over 50,000 miles, and runs like a new car.  Every time I drive it, I can't believe it is so nice.  It is hard to understand how Cadillac made such an advanced car in 1941, and that 80 years later it is "just as good as new".  They just seemed to get it all together in '41, and the 60S has to be top of the top, for me at least.  I'm a bit of a nut case when it comes to originality, and my car is amazingly original...trunk, carpets, upholstery, all day one.  The paint is a bit past it now, but I can see past that to an excellent piece of Cadillac history.  Enough with the superlatives!

People have said for years that '41 is the most popular collector Cadillac.  I suppose that is now surpassed by the '59, and that's fine.  Times change.

I wonder if the "younger generations" will continue to appreciate the '41, as we old guys have done.  I hope so, because they deserve it.
Title: Re: Love of '41 Cadillacs
Post by: Barry M Wheeler #2189 on August 18, 2020, 06:50:21 PM
Dennis, If I should ever win the Publisher's Clearing House prize, I will camp on your doorstep and start throwing money at your porch. I do have the next best thing...The 1:18 model in "your" color on top of our amoire so I see it every night while we're watching TV.

I forgot to mention that I crawled under this car on the first Indiana driving tour one night after supper. The wood framing was slightly faded but still crisp and appeared to have no splinters on the edges. Dennis, I looked and looked and all I saw "wrong" was a faint smudge in the material above the RH front arm rest.
Title: Re: Love of '41 Cadillacs
Post by: dinhnguyen57 on August 19, 2020, 02:25:38 AM
My love affair with the 1941 Cadillac started when I saw an ad for a 1941 customers Cadillac coupe. For a year, I would keep looking at that ad again and again.  Sometimes it would disappear and I thought..I better stop my day dreaming because someone bought it.  But it appeared again.  I didn't think I could possibly afford it, but some how I called up the owner, our Bob Hoffman, and he invited me to come take a look.  I said I couldn't afford it, but he said just come and look anyways...so I came....and after a week or so, Bob sold me the car.  I was in heaven.

I'll never forget the feeling of driving and looking down the long hood to see the flying lady hood ornament.  So this was what it was like to live in the 1941.

I thought of all of the things that I could make it even better, but after thoroughly thinking it over and researching and thinking about again and again...I realized Bob did a perfect job customizing and restoring the car already.  The car was perfect already.

Thank you Bob, for a once in a lifetime opportunity! 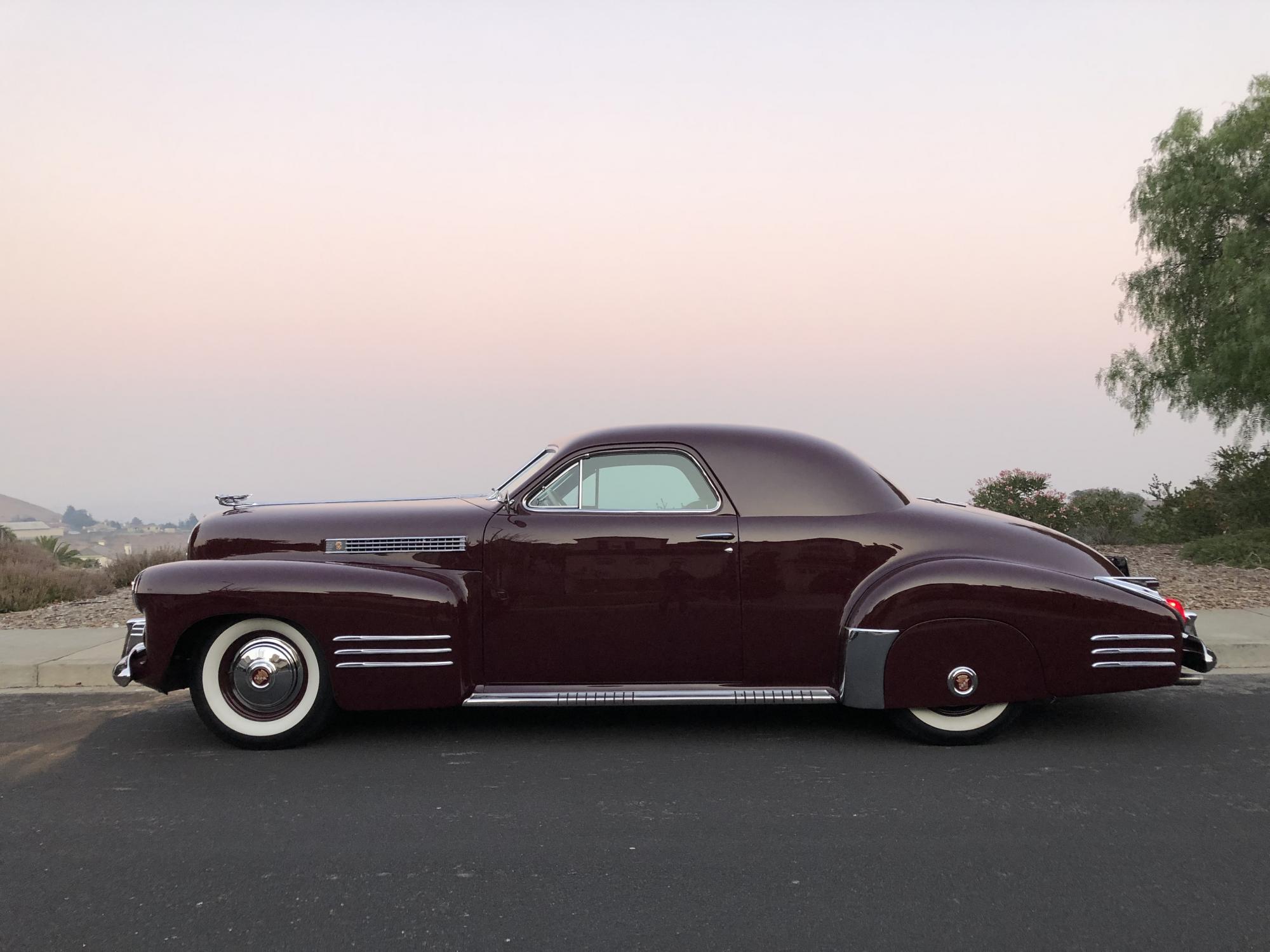